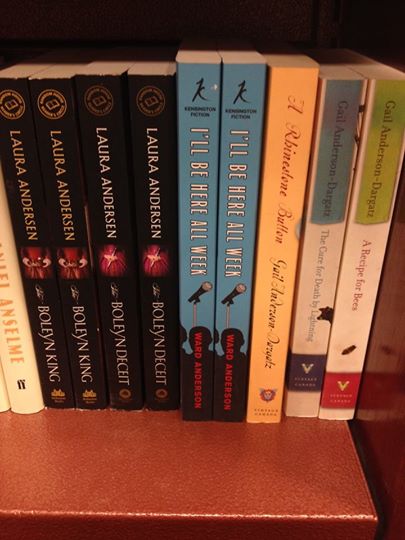 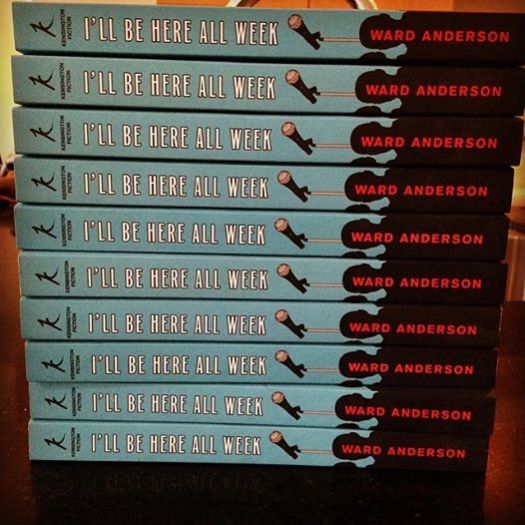 Goodreads, a great site for readers, is giving away 25 copies of my upcoming novel absolutely FREE!

All you have to do is CLICK HERE to go and enter for your chance to win. The contest ends at the end of April, so check it out soon.

I’ll Be Here All Week hits bookstores on May 27th, and is available now for pre-order wherever books are sold.

On newsstands today. The April issue features a sidebar written by yours truly. Click on the photo to learn more.

My debut novel, I’ll Be Here All Week, hits book stores on May 27th.  But you can pre-order it now wherever books are sold.  It’s on sale already, and cheaper if you pre-order.  So, here are some handy-dandy links for ya: 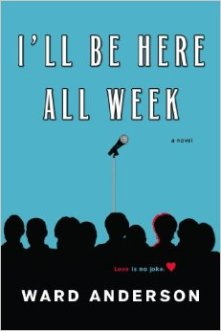 Well, 2014 is upon us and I’m excited for what this year has to offer.  You know, it’s hard to beat the amazing 2013 I had, but I’m sure willing to try.  Last year, I managed to sign a two-book deal with Kensington Books in NYC (my first novel is being released May 27th), got my own radio show on SiriusXM (“Ward and Al” airs weekdays, 1pm to 4pm EST on Channel 167), and was named Cadillac’s “Achiever of the Year” (#DriveCadillac).  Needless to say, it was amazing.  All of this, of course, pales in comparison to the fact that in December I became a father for the first time.  Such an amazing year, indeed.

That doesn’t mean I’m slowing down, mind you.  Not if I can help it.  Beginning February 2nd, SiriusXM has graciously given me a second talk radio program.  Thanks to my bosses at SiriusXM and the fine folks at Sharp Magazine, I’ll be co-hosting the new Sharp Magazine Show on SiriusXM, Channel 167.  Tune in every Sunday night at 8pm EST to hear the show.  I have a feeling it will repeat throughout the week.  The great Jeremy Freed, editor-in-chief of Sharp is in charge, taking me along for the ride. It’s going to be a great show.

On May 27th, my first novel is being released by Kensington Books.  I’ll Be Here All Week has been getting some nice advance praise, and I’m looking forward to seeing how readers react once it hits shelves.  As part of the media frenzy preceding the book release, I’ll be doing something I haven’t done in almost a year: I’m going on tour.

Yes, I’ll be filling my calendar with some random comedy club dates this spring and summer.  Stay tuned for dates and details.  Also, my “Ward and Al” co-host, Allison Dore, is going to be joining me for a string of comedy dates all across Canada.  We’re excited about a very busy year ahead.

I’ll also continue to contribute to Huffington Post, AmongMen.Com, and whomever else wants to give me a place to type or talk.

People ask me about the life of a comic all the time. Even if they rarely watch stand-up comedy or never go to a comedy club, they always want to know about the years I spent touring full-time. “Have you ever been on TV?” “How often do you tour?” “What’s the money like?” Here are five quick things you might not know about those who are funny for money..

5. We Pay Our Own Travel Expenses. Occasionally, after a particularly long drive from Canada to Florida, I will have someone comment on just how crazy that idea is. “Why drive so far?”or “Why don’t you fly?” If only we lived in such a perfect world. When a comic has reached the level of fame such as Louis CK, the travel expenses are handled by a venue, promoter, or manager. The pay is often increased to accommodate for airfare, etc. That’s successful, famous comedians. The average “working” comic, however, is paid for the gig, period. Just the gig. How he gets to the gig — or how much he spends getting there — is his problem. If the venue likes the comic, they’ll probably have someone pick him up at the airport on those occasions when he’s lucky enough to fly there. But no promises. If you ever hear what a comedian is being paid for the week, remember that his plane ticket or gas money (plus food and taxes) comes out of it. The profit starts after all of that has been taken out. So, many comedians drive to all of their gigs because they have to book them as a weeks-long tour in order to keep expenses lower.

4. We Work More Than An Hour Per Day. There is a constant running gag that comedians say, onstage and off: “I only work an hour a day”. It gets said by comics all the time, on the radio, during a show, or even just when hanging out with friends. Again, this is a “In A Perfect World” scenario. Famous comedians have “people”, and those people often handle the business aspects of their careers. The average comic, however, has to book his shows himself, call or email clubs and club owners himself, promote his shows by himself, book his travel himself, and manage his calendar himself. There are fifty weeks per year that need to be filled, and that takes time. It means contacting dozens (if not hundreds) of booking agents, managers, and club owners, all week long. Add with that time for writing or working on new material, travel time, time spent doing PR or promotions, interviews, and just getting to and from the gig, and it’s definitely a full-time job.

3. We’re Not Always Funny. Stand-up comedy can be a ton of fun, but it can also be a job. Just like you have days when you find it hard to do your job, comics often have days when our job is difficult, too. And, just like the average guy wants to leave the office at the end of the day and not think about data entry anymore, comics often don’t want to continue showing off once the stage lights go down. So, not everything we say to you on the street is meant to be funny and, sometimes, we just want to be taken seriously. Seems like common sense, but you’d be surprised how often we hear “Gee, I thought comedians were supposed to be funny” any time we have a conversation about politics at a dinner party, or “don’t try using that one in your act” whenever we make an offhanded remark about traffic offstage. Believe it or not, we have lives outside of the comedy club and sometimes like to leave work behind just as much as the dentist doesn’t want to be looking at teeth while shopping at The Gap. I’ve lied more than once about what I do for a living when asked by strangers sitting next to me on a plane because I know there’s a good chance they’ll ask me to tell them a joke. Sometimes we’re off duty.

2. We’re Worthless In The Summertime. You know how Hollywood has huge blockbuster movies in the summertime? You know how the water parks open up and everyone goes out to barbecues and to the beach? All of that hurts the stand-up comedy business. Summertime is the slowest time of the year for comedy clubs, and the business in some cities drops off drastically once June rolls around. In fact, clubs can go from being packed to almost empty once the summer kicks in. To offset the money lost during this time, comedy clubs came up with an ingenious plan to save money: Summer Pay. Put simply, many comedy clubs pay comedians less during the summertime than they do most of the year. How much less? Up to fifty percent less. Yes, some clubs pay comics half during the summer what they normally get paid any other season. The argument is that business is slower so they have to pay us less in order to survive the slow season. Keep in mind, we usually do the same amount of shows, work the same days per week, and do the same amount of time onstage as we do every other season. Also, keep in mind that no comedy club manager works for less pay during this slower season. Some clubs go the extra step of booking only local comedians during the summer so they can save money by not having to put the talent up in a hotel. So, if you go to a comedy club in July and notice the comedian is doing a lot of local humor, you’ll know why.

1. Constant Touring Pays The Bills. I never tell people the kind of money I make. Mostly, that’s because it changes all the time. Some clubs pay very well, some not so much. There is no industry standard and the money changes from week to week, depending upon everything from experience to location to number of shows performed per week. One thing that is constant, however, is that comedians are not paid through the roof. In fact, the industry itself hasn’t seen a pay increase (or adjustment for inflation) in over twenty years. Sure, when a comedian becomes a household name or has a stack of TV credits, the money goes up and can be quite cozy. Typically, however, the average working “club comic” lives–if he’s lucky–a middle-class life. Recent estimates show that the average, non-famous, working comedian makes around thirty grand per year. Some make more, some make less. What keeps the money rolling in? Constant touring. If we’re not touring, we aren’t working. When you hear a comedian say that he tours five out of six weeks, remember that it’s because that is the only way to make a living doing it.

Stand-up comedy, much like the rest of the entertainment industry, has its share of famous millionaires overshadowing scores of starving artists. This weekend, skip the megaplex and journey down to the local comedy club to see a show performed by some unknown comic who has never once been on television. You might just be surprised and laugh harder than you have in years. 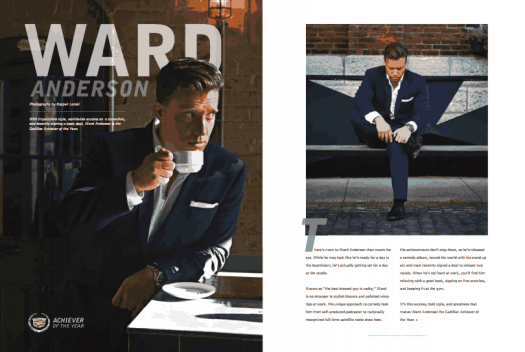 I was named Cadillac’s “Achiever of the Year”.

Here’s a photo of it.

Thanks to everyone who made it happen.

Here’s a handy-dandy article written by Ward for The Huffington Post this week.